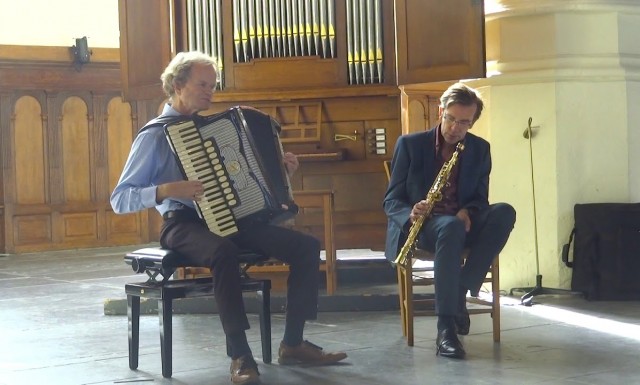 This duo of jazz musicians, who have also won their spurs in the fields of both classical music and world music, are about to engage in a new challenge. Bert van den Brink (1958, piano, organ and accordion, awarded the 2007 Boy Edgar Prijs [Boy Edgar Prize]) and Pieter de Mast (1964, soprano saxophone and flutes) share their love of working in genre-crossing contexts.

In addition to being a performing musician, Pieter de Mast is also a composer, who writes music, for instance, for the ensemble Windstreken in which medieval and contemporary classical music converges with North-Indian and Arabo-Andalusian traditions and jazz. Bert van den Brink is mainly known as a pianist and organist, but his is also a quite determined manner of playing the accordion keyboard. Contrary to the organ, any dynamic nuance can immediately be heard on an accordion. Van den Brink plays the characteristically sounding accordion of the late Harry Mooten, who when alive was, together with Johnny Meijer, the most praised Dutch musician on this instrument.

The duo originated following an arrangement to give a one-time concert together in 2019, using the organ in the Leiden Hooglandse Kerk. However, this was made impossible by a fire in the organ. So as to play a programme almost similar in sound, it was decided that Van den Brink would play the accordion. In essence, the accordion is a wind instrument.

De Mast and Van den Brink play a programme consisting of compositions by De Mast and jazz standards. They love mutually unexpected interventions in order to process them into an original joint improvisation. Pieter and Bert have in common the fact that either musician is renowned for their sophisticated attention to timbre.